Comitta is a member of Mayor against Illegal Guns and has been endorsed by CeaseFirePA and Chester County Coalition to Prevent Gun Violence. 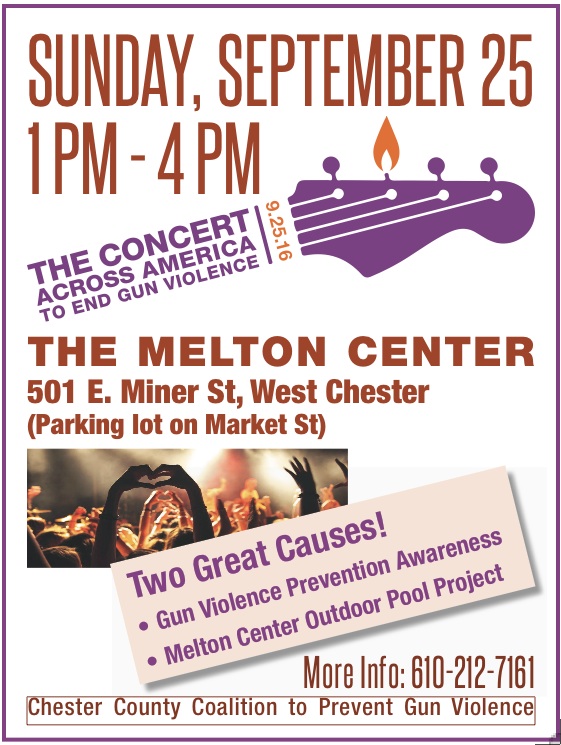 I am pleased and honored to be endorsed by the Chester County Coalition to Prevent Gun Violence, an organization in our local community, working daily to change the laws enforcing common sense gun safety measures. Led by my friend Tom Buglio, CCCPGV has marched and protested against our local elected officials to call attention to the devastation caused by guns.

I pledge to be a champion for this issue!

I pledge to fight to make universal background checks a reality.

I pledge to bring people together, to build coalitions, to get things done!

Please register on my website to volunteer or make a donation to help spread my message this fall. Please stay in touch. This campaign is going strong, and we WILL win with all your help and support.

I’m ready to serve the 156th District in Harrisburg. With your support, I’ll get there.

Thanks for all you do.

PS I pledge to continue bringing people together to find solutions that will improve our community and help keep people safe.

Many thanks to Andy Hachadorian for his recent thought-provoking article titled, “What’s the Answer to Gun Violence?” Andy ended his article with a question to readers: “What are we going to do? I’m all ears.” I am a member of Mayors Against Illegal Guns, part of Everytown for Gun Safety. We’re united in the conviction that support for the Second Amendment goes hand-in-hand with keeping guns out of the hands of criminals, domestic abusers and people with severe mental illness. I am happy to share a simple answer to Andy’s question: close the loopholes in our background check system.

Do home security systems prevent all burglaries? Of course not, and no one claims they do or expects them to. Home security systems reduce burglaries. By requiring background checks for every gun sale, we make obtaining a gun harder for people who are prohibited from buying guns because of mental illness, and thereby reduce gun violence. Reducing gun violence is also the goal of those of us, including me, who agree that increased access to mental health treatment is part of the solution. Other developed countries have similar rates of mental illness, but they don’t have anywhere near the level of gun violence.

In states like Pennsylvania that require background checks on all handgun sales, 46% fewer women are shot to death by intimate partners, 48% fewer law enforcement officers are killed with handguns and there is 48% less illegal gun trafficking. After Missouri repealed background checks on private gun sales, gun homicides went up 25%, and gun trafficking rose too. END_OF_DOCUMENT_TOKEN_TO_BE_REPLACED

One year ago, our nation was shocked by a tragedy that still affects us today. The Sandy Hook Elementary School shooting opened America’s eyes to the daily tragedy of gun violence, the lives lost and the weaknesses in our laws intended to prevent it.

One of the first actions I took as a mayor-elect four years ago, was to join Mayors Against Illegal Guns. I am very aware of gun violence across the country and in our community, and committed my efforts to raise awareness and take action to improve gun safety while protecting Second Amendment rights.

Today we observe a moment of “No More Silence” to honor the victims at Sandy Hook and the many victims who lose their lives to gun violence every day. The time for moments of silence has passed. We cannot sit silently as our leaders fail to act.

In the past year our movement has grown, and the cry for our children’s safety has grown louder. Millions of Americans have joined with us, and in Southeast Pennsylvania, grassroots groups dedicated to preventing gun violence have swelled in size. In Chester, Delaware, Philadelphia, Bucks and Montgomery counties, a diverse coalition of mayors, moms, religious leaders, law enforcement, survivors and their families are more committed than ever to saving lives.

This year we called on our federal government to act, and most of our senators, including Bob Casey and Pat Toomey, voted for sensible expansion of background checks. Quinnipiac polls in April and June showed that most Pennsylvanians viewed Sen. Toomey more favorably because of his leadership on preventing gun violence. But 46 senators were able to block his common sense proposal.

Thanks to Pennsylvania’s state police and attorney general, we have made progress this year keeping guns out of the hands of people with severe mental illness problems and affirming Pennsylvania law enforcement’s right to decide who may carry loaded, concealed guns on our streets.

States all around Pennsylvania – New Jersey, Delaware, New York and Maryland – strengthened their own gun laws this year, and there is legislation proposed in Harrisburg that would save lives without curtailing gun rights.

But legislative leaders in Harrisburg won’t even allow a vote. …

Specifically, Santarsiero defended his legislation to close a loophole that prevents background checks on all gun sales in Pennsylvania.

“House Bill 1010 in no way infringes Second Amendment rights,” he said. “It simply closes the last remaining background check loophole. Pennsylvania has an opportunity to take a small step toward responsible gun ownership with House Bill 1010, something that Congress seems unable to do.

Lancaster Mayor Rick Gray, Pennsylvania chairman of Mayors Against Illegal Guns, said, “The Supreme Court is very clear that possession and sale of firearms are subject to regulation under the Second Amendment. Anyone who wants to preserve the Second Amendment ought to agree with Senator Pat Toomey that modest laws like requiring background checks aren’t gun control, they’re common sense.”

West Chester Mayor Carolyn Comitta said: “In the past few months, Pennsylvania has taken some small but important steps that will help keep guns out of the hands of criminals and people with severe mental illnesses. We made a lot of progress on background checks in Washington, but fell a few votes short of a bipartisan compromise. If Senators from places like North Dakota and Alabama won’t stand up for the majority of Americans, it’s up to us make progress here in Pennsylvania.”

CeaseFirePA Executive Director Shira Goodman said: “The votes of Senators Toomey and Casey reflect the wave of change sweeping through Pennsylvania. The people of Pennsylvania are depending on Harrisburg to stand up for us and deliver commonsense gun laws like background checks on every gun sale.”

“I will continue to push for House Bill 1010 to help safeguard our communities,” Santarsiero said. “We cannot remain silent while dangerous criminals and the mentally unstable are able to purchase deadly weapons that can be used for senseless acts of violence.”