Before you go…
To volunteer to help elect Democrats up and down the ballot this year and next, see our facebook page or email contact@wcborodems.org

De·cid·ing adj. – Determining or able to determine an outcome

On Tuesday, May 19, 2015, to the polling places will go civic-minded West Chester Area School District residents. It is an off-year election, mostly consisting of county and township level contests – row officers, judges, supervisors and school board.

Although it is an off-year election, know that Primary Election Day, Tuesday, May 19, 2015, directly impacts your quality of life. These races are about your county, school district and township taxes, your property value, the environment, and the strength of your community.

Every school board election brings change to a school district. The Better Direction candidates want to continue to build upon our district’s successes. West Chester ranks in the top 1% of school districts in Pennsylvania according to PA School Performance Profile and has been named to the Annual AP District Honor Roll by the College Board five years running. All three high schools are ranked in the top 100 high schools in PA and the top 500 high schools nationwide. WCASD maintains the lowest school property millage rate in the county. Voting on May 19, 2015 for the Better Direction for West Chester school board candidates is a powerful way to support student success and strengthen our community and property values.

Voting is your chance to stand up for the issues you believe in; do not skip it. 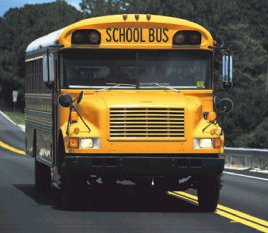 Despite some conservative opposition, a new 3-region voting plan passed tonight by the West Chester Area School Board (WCASB). With one director absent, the final vote is 6-2 in favor of the map below.

The Borough of West Chester (purple) is in the new Region 1, along with most of West Goshen. If approved by our courts, our local voters will have greater input in selecting board directors who represent us.

No longer will just a few municipalities —or one party— control school board elections. More importantly, communication between board directors and their constituents becomes closer and directors become more responsive to residents.

Although not a Democratic Party initiative, we think this is a progressive step by our current board directors. Join us in giving them our thanks by contacting the Board.

Click here to learn more about Dianne’s background and speech.
Click here for a flyer PDF to display in your organization or community.

I am writing to ask you to vote this coming Tuesday Nov 5th for Chester, Kaliner, McCune and Swalm for WCASD school board.

The incumbent slate (appearing as Republicans on the ballot) is funded by an organization led by Colin Hanna, an ex Chester County Commissioner who has been called “The New Norquist.” Hanna is a national political power broker who recently fought to keep the government shut down, who wants to push a social agenda in public schools, who speaks for the radical Tea Party on national news shows, and who wants to funnel taxpayer money intended for public schools into private schools – which effectively defunds public education. Please ask yourself: Why are Carpenter, Coyle, Latorre and Pimley taking money from Colin Hanna’s political group?

Joyce Chester, Robin Kaliner, Chris McCune and Ricky Swalm are moderate candidates who believe in the benefits that a quality public education offers our children. They understand that a quality school district is the cornerstone of a prosperous community, no matter where you may send your own kids to school. Three of these candidates are registered Republicans, even though they will appear as Democrats on your ballot. For what it’s worth, I know these candidates personally and, although I don’t always agree with them, I respect their integrity, their independence, and their strong commitment to our schools.

Please join me and your many other concerned neighbors, and kick politics out of education.

Please forward this on to your friends and neighbors. 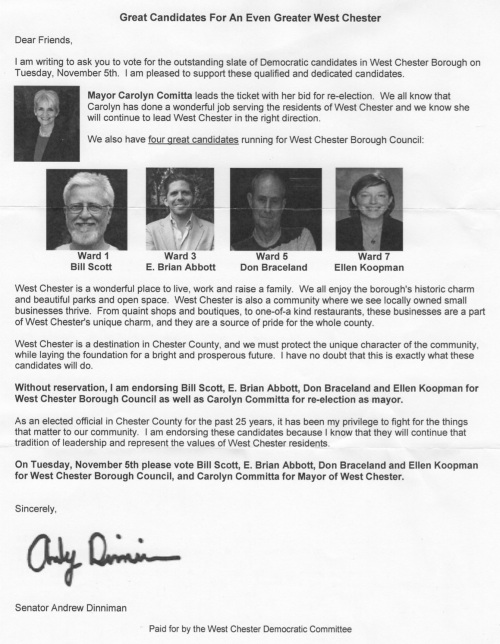 De·cid·ing adj. : Determining or able to determine an outcome

On the first Tuesday after the first Monday in November to the polling places will go civic-minded residents. It is an off-year election, mostly consisting of county and township level contests – row officers, judges, supervisors and school board.

Although it is an off year election, know that  Election Day, Tuesday, November 5th, directly impacts your life.

These races are about your county, school district and township taxes, your property value, the national and state ranking of your school district, the environment, and the strength of your community.

Every school board election brings change to a school district, but this election represents a turning point for West Chester. Our students deserve a board that is committed to public education over ideology, and our residents understand that our property values stay strong when our community stays strong.

Joyce Chester, Robin Kaliner, Chris McCune and Ricky Swalm are determined to move the West Chester Area School District’s present ranking up to the highest performing district in the region.

Voting is your chance to stand up for the issues you believe in; do not skip it,

VOTE ON NOVEMBER 5TH FOR

Also, hear an interview with the candidates by Bill Mason at WCHE, 10/7/13.

For context, see also, from WestChesterTeach:

Better Direction for West Chester (the bipartisan pro-education team running for West Chester Area School board) invites you to attend two events where it receives 20% of the cost of food purchased.

GIVE %20 …means dine with us on Monday October 28, 2013, and Iron Hill will donate 20% of your food bill (excluding alcoholic beverages or tax) to Better Direction for West Chester. Thank you for your support.

(You must bring coupon with you, can’t receive on the premises.)

For more on these 4 candidates, see their site.