END_OF_DOCUMENT_TOKEN_TO_BE_REPLACED

Almost 90 Chester County residents joined the panelists Wednesday night at Mitchell Hall at West Chester University, filling the room to the point of standing room only. Event attendees submitted questions for the panelists, and an engaging discussion ensued about how residents can work together to push for clean energy and ensure a healthy, livable climate for all.

With record heat waves and torrential downpours hitting the state and wildfires burning across the West Coast, the need for clean energy solutions and moving off of fossil fuels to solve climate change could not be any clearer.

“As Pennsylvanians, we have a constitutionally-protected right to ‘clean air, pure water and the preservation of the natural, scenic, historic and esthetic values of the environment.’ We must continue to assert ourselves in defending and supporting those rights,” said Dinniman.

The state-elected officials in attendance both cosponsored legislation in the General Assembly that would require Pennsylvania to transition to 100 percent renewable energy by 2050. This legislation is HB2132 in the state House and SB1140 in the state Senate. END_OF_DOCUMENT_TOKEN_TO_BE_REPLACED

Speakers received vocal support from the crowd. The citizens have never gotten answers, said Senator Dinniman, who in April filed a formal legal complaint against the the Public Utility Commission over its inadequate attention to safety and siting. The Mariner East case is as important as the Valdez oil spill in Alaska or the Love Canal in New York state, Dinniman said, and Pennsylvania government should be standing up for the PA constitution and private property rights. As he and other speakers emphasized:

The people have a right to clean air, pure water, and to the preservation of the natural, scenic, historic and esthetic values of the environment. Pennsylvania’s public natural resources are the common property of all the people, including generations yet to come. As trustee of these resources, the Commonwealth shall conserve and maintain them for the benefit of all the people.

photo thanks to Dianne Herrin

We all need safe food and clean water.

Sunoco is infamous for reckless drilling and polluting local communities — we can’t let them build hundreds of miles of new pipeline, especially next to elementary schools and homes!

On June 9, we will rally with affected communities to say No Mariner East!

Photo from Food and Water Watch

[Philadelphia, PA] — A bipartisan group of 180 U.S. mayors, representing 42 states including Pennsylvania, are speaking out in support of solar energy. Pennsylvania had more support than any other state in the nation, with 43 signers from municipalities across the Commonwealth.

In a letter released today by the citizen-based non-profit environmental advocacy group PennEnvironment, the mayors resolve to make solar power a key element of their communities’ energy plans and call on others to embrace clean energy from the sun.

“Support for solar power continues to gain traction in the eyes of the public,” said Kelly Flanigan, Global Warming Solutions Associate for PennEnvironment. “We applaud Pennsylvania mayors for hearing that call to action and rising to the occasion.”

West Chester Dem Committee letter to Governor Wolf, below. For more on Grant and Highland municipalities’ resistance against the fracking industry and PA DEP, see “The Rights of Nature Movement Goes on Trial” in Rolling Stone, 1/10/18, and “How a Small Town Is Standing Up to Fracking” also in Rolling Stone, both by Justin Nobel.

As active citizens in the county seat of Chester County, we are very concerned by the Commonwealth’s actions in promoting pipeline construction in our environs.

As you well know, homeowners’ rights are being overridden, plans are being made to route a pipeline virtually underneath the Chester County Public Library in Exton, and many properties are threatened or already devastated (see, e.g., “Sinkhole opens up during pipeline drilling in West Whiteland“).

Just as upsetting to us, the PA DEP has joined with fracking operators to sue the municipalities of Grant and Highland PA. Those communities’ apparent offense is to stand up for their civic and environmental rights in just the way that West Chester and other PA municipalities are doing and intend to continue doing.

We call on you as our Governor to support community environmental rights and to call off the PA DEP from actively supporting pipeline construction and from suing our fellow municipalities.

Thank you for your attention and for any reply to our concerns,

[This article from the WCU student newspaper shows, through local residents’ reactions, some of the types of personal impact from the rushed and rule-breaking Sunoco pipeline construction just north and east of the Borough: yards are destroyed, homeowners could need to evacuate, real estate values may fall… and all that without the feared catastrophic gas release or explosion.]

West Whiteland resident Thomas Allen suffered the consequences of a sinkhole that opened up in his backyard on Nov. 11 during a drilling for Sunoco’s Mariner East 2 pipeline.

The incident, referred to as an “inadvertent return,” was caused by Sunoco’s horizontal directional drilling (HDD) that released about 1,500 gallons of drilling mud—a mixture of bentonite clay and water—on Allen’s property, forming an eight-by-eight-foot sinkhole.

“This isn’t just a spill or inadvertent return, I might have to move out of my house,” said Allen. “My house may be condemned.”

Allen explained that after the incident, Sunoco’s cleanup crew came for one day to contain the spill but did not perform a complete cleanup. Sunoco fenced in the backyard and placed a piece of wood over the hole. “There’s still mud all over my yard. My backyard is unusable and I can’t even get to my shed,” said Allen.

Allen expressed dissatisfaction with the way Sunoco and the Department of Environmental Protection have been handling the situation.

“I haven’t heard from the DEP at all,” said Allen. “All I’ve got from the DEP was a Notice of Violation saying Sunoco knew about this since August and has been lying about it.”…

read more at the Quad

And what is the state doing to protect the citizens’ rights to fight off environmental contamination? Unfortunately, the PA Department of Environmental Protection has itself sued Grant and Highland municipalities for trying to fend off fracking waste injection through their Home Rule Charters. Our state protecting the polluters: totally unacceptable!

Court Awards $52,000 to Oil and Gas Company and Calls for Disciplinary Action Against Attorney

MERCERSBURG, PA: Today, the United States District Court for the Western District of Pennsylvania issued an order imposing sanctions on two attorneys defending a Community Bill of Rights Ordinance adopted by Grant Township, Pennsylvania. The Township has spent years fighting to stop frack wastewater injection wells from being sited in the community with assistance from the Community Environmental Legal Defense Fund (CELDF).

Injection wells – which involve the high pressure underground dumping of millions of gallons of frack wastewater, which contains toxins, carcinogens, and other chemicals – cause earthquakes, can contaminate drinking water, and bring other environmental and public health impacts.

Not satisfied with suing the community and questioning its authority to protect the people and environment of Grant Township from injection wells, the company decided to punish its lawyers by seeking monetary sanctions against them.

“At a time when Americans more and more are looking to the courts for reason and justice, today we find neither, as corporate forces once again have been able to wield our institutions of government to punish those working to elevate the rights of communities over fossil fuel corporations,” stated CELDF’s Associate Director Mari Margil.

Magistrate Judge Susan Baxter earlier found that the Township’s prohibition on injection wells violated the corporation’s constitutional rights. The case is scheduled for a jury trial in May, at which PGE will seek hundreds of thousands of dollars from the Township, claiming that it suffered harm because the company has been prevented from dumping frack waste in a residential area next to the Township’s sole source of drinking water.

Sunoco seems determined to make life around here untenable. And if the PA Department of environmental Protection lets it proceed, shame on DEP! The following is an email from activist Bernie Greenberg, under the title “Comments Needed – Sunoco Open Trench in Exton”:

This is a critical issue that needs our attention and action. Sunoco, who is building the Mariner East 2 pipeline, plans to do open trenching instead of horizontal directional drilling due to restrictions in a recent ruling. This liquefied natural gas pipeline with run through densely populated areas in Exton, Chester County, PA next to the Exton Shopping Mall, the main branch of the Chester County Library, through wetlands, streams and forest land, as well as park land and ball fields. Please state your concerns by commenting to the PA DEP by November 20 by email at ra-eppipelines@pa.gov or Virginia Cain’s direct email at DEP: vicain@pa.gov. Thank you very much and spread the word!

It is appalling to me that the DEP would even consider Sunoco’s request to be permitted to route the Mariner East 2 pipelines directly through Exton by open trenching. The agreement reached this past August with the Environmental Hearing Board proposed that Sunoco modify their HDD method to prevent further damage to local water sources or relocate the pipeline. Instead Sunoco wants to use trenching through the most congested part of central downtown Exton close to the busy library and two major shopping centers. This would create not only massive congestion problems but unnecessary risks to thousands of people in the area if the pipeline should rupture.

Sunoco’s rationale for this route is totally unacceptable since it will result in the most disturbance and risks to the residents and customers in this area. They have not provided any valid rationale for not relocating the pipeline to a nearby less congested route which would result in far less damage to our environment and expose far fewer residents to the risks from pipeline leaks or ruptures.

For these reasons I urge you to disapprove Sunoco’s request to trench through central Exton.

Read about this sinkhole that recently formed in a backyard in Exton. 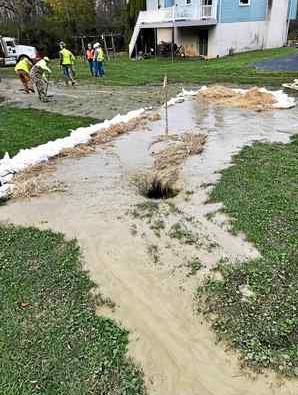