Former President Barack Obama warned Democrats against sitting out the midterm elections during a North Philadelphia rally Friday for U.S. Sen. Bob Casey, Gov. Wolf, and the party’s other candidates in Pennsylvania.

He singled out young, African American, and Latino voters amid concern that the traditional drop in turnout from presidential years could harm the Democratic Party’s chances of gaining ground in Congress and statehouses amid low approval ratings for President Trump.

And he chided Trump, without naming him, for bragging about improving economic conditions that started before the Republican moved into the White House last year.

“So when you hear right now, folks, right now, taking credit for this economic miracle, c’mon, they act like it all just started. Please,” Obama told a raucous crowd of about 5,000 at the Dell Music Center….

Earlier this week, we observed Labor Day, a time to honor America’s workers and their families who, generation after generation, have carried this nation forward on their shoulders.

Labor Day was started in the 1880s, a time when many Americans worked 12 hours a day, 7 days a week just to cover their basic needs. Many states without meaningful child labor laws saw 5 and 6-year-olds working in dangerous conditions in mills, factories, and mines all across the country.

America’s labor movement brought an end to many of these practices, banding together to bargain collectively for the 40-hour work week, safer working conditions, fair pay among other employment protections we take for granted today.

Despite this progress, Labor Day remains as important as ever. Workers and workers’ rights remain the backbone of the middle-class, something I’m committed to protecting in Washington — sign your name if you agree.

I am proud to have the support of the labor community and I am proud of the hundreds of quality jobs I have helped bring to Southeastern Pennsylvania over the course of my career.

I am now running for Congress to fight for middle class families and bring more good paying jobs to our community. Thousands of American workers still die on the job every year. Many workers are forced to put in overtime hours for no additional pay. Female workers and workers of color too often work for less than their counterparts. And if you account for inflation, our middle-income families haven’t gotten a meaningful pay raise in more than 40 years.

We have real work to do to build up the middle class, and I can’t think of a better way to honor the men and women who sparked this movement that made this progress possible than to continue building on their work in Washington.

Image from email from Progressive Democrats of America. Our added comments:

FDR proposed this “economic bill of rights” in his January 11, 1944, State of the Union message to Congress. Some but not all of these rights have been embedded in American life since the New Deal and even those have been imperfectly implemented and subject to erosion, especially in today’s political climate.

“It is our duty now to begin to lay the plans and determine the strategy for the winning of a lasting peace and the establishment of an American standard of living higher than ever before known. We cannot be content, no matter how high that general standard of living may be, if some fraction of our people—whether it be one-third or one-fifth or one-tenth- is ill-fed, ill-clothed, ill housed, and insecure…. We have come to a clear realization of the fact that true individual freedom cannot exist without economic security and independence…. People who are hungry and out of a job are the stuff of which dictatorships are made.”

There was a real leader! FDR, your country needs you today, on Labor Day, every day!

EAST GOSHEN>>About 250 walkers laced up their running shoes on Sunday while remembering Bianca Nikol Roberson who was killed during a June 2017 road rage shooting.

The inaugural rally and 2.5 kilometer walk, “Walk for Me,” was held in East Goshen Park. Participants in the fundraiser walked to end gun violence.

Roberson, 18, had just graduated Rustin High School and was headed for Jacksonville University when a 10-second argument during a highway merge on the Route 100 Bypass turned deadly.

Almost 90 Chester County residents joined the panelists Wednesday night at Mitchell Hall at West Chester University, filling the room to the point of standing room only. Event attendees submitted questions for the panelists, and an engaging discussion ensued about how residents can work together to push for clean energy and ensure a healthy, livable climate for all.

With record heat waves and torrential downpours hitting the state and wildfires burning across the West Coast, the need for clean energy solutions and moving off of fossil fuels to solve climate change could not be any clearer.

“As Pennsylvanians, we have a constitutionally-protected right to ‘clean air, pure water and the preservation of the natural, scenic, historic and esthetic values of the environment.’ We must continue to assert ourselves in defending and supporting those rights,” said Dinniman.

The state-elected officials in attendance both cosponsored legislation in the General Assembly that would require Pennsylvania to transition to 100 percent renewable energy by 2050. This legislation is HB2132 in the state House and SB1140 in the state Senate. END_OF_DOCUMENT_TOKEN_TO_BE_REPLACED

Our elected representatives were there in force, all speaking eloquently to the crowd of about 600. Some highlights:

“We are here because we are facing a crisis that transcends politics.”

“We will not be accomplices to this cruelty that is before us.”

“We are going to insure Liberty and justice until we win.”

156th district representative in Harrisburg Carolyn Comitta serves on the Governor’s Commission on Women, which together with the Commission on Latino Affairs, Asian Pacific American Affairs, and African American Affairs has issued a joint statement denouncing the separation of families and the use of children as “political pawns.”

State Senator Andy Dinniman (D-19) noted that he has spoken many times on the court House steps, but never thought he’d be there protesting the separation of families by the US government.

His remarks received sustained applause, including “It’s cruel, it’s immoral, it’s wrong, and we’ll make sure that it stops” and “We are here today to reclaim the soul of America.” 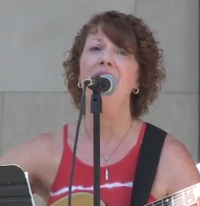 Speakers received vocal support from the crowd. The citizens have never gotten answers, said Senator Dinniman, who in April filed a formal legal complaint against the the Public Utility Commission over its inadequate attention to safety and siting. The Mariner East case is as important as the Valdez oil spill in Alaska or the Love Canal in New York state, Dinniman said, and Pennsylvania government should be standing up for the PA constitution and private property rights. As he and other speakers emphasized:

The people have a right to clean air, pure water, and to the preservation of the natural, scenic, historic and esthetic values of the environment. Pennsylvania’s public natural resources are the common property of all the people, including generations yet to come. As trustee of these resources, the Commonwealth shall conserve and maintain them for the benefit of all the people.

photo thanks to Dianne Herrin

We all need safe food and clean water.

Sunoco is infamous for reckless drilling and polluting local communities — we can’t let them build hundreds of miles of new pipeline, especially next to elementary schools and homes!

On June 9, we will rally with affected communities to say No Mariner East!

Photo from Food and Water Watch

The interesting part of primaries is usually the turnout, which measures the enthusiasm and commitment of voters and, through that, also the effectiveness of party activists.

We usually compare unofficial results right after each election to the corresponding election 4 years earlier, but so much has changed so fast that the 4-year comparison isn’t as meaningful any more as comparing to 2017, a breakthrough year in Dem turnout and success.

Dems comprise 53% of all registered voters in the Borough and slip to 49% only in wards 1 and 5. The registration high point is wards 2E with 72%. The County as a whole is only 39% Dem compared to 43% R and 18% I), but the County D to D+R ratio did increase by .4% in the past year. Chesco Dems are probably in a good period for registrations, though not comparable to 2008. The countywide R lead in registrations (now a bit over 15,000) has been declining slowly since the Dem Obama surge in 2008; but fortunately, our candidates clearly received a good number of R and I votes in the 2016 and 2017 general elections.

Overall the Dem share of D+R registrations in West Chester has risen about 1% in the last year. That makes up for lost ground since the Dem share went down 1% in 2013-17. The D % of D+R reg declined only in precincts 2E (probably reflection Union Station’s continued growth) and 4 (due maybe to large number of I’s, the highest of any precinct at 26%).

The County Dem turnout increase of 4.4% from 2017 to 2018 is very encouraging. As usual (though not the case in 2017) West Chester Dem turnout was somewhat lower than the County’s, by 3.3%, reflecting our younger and more mobile demography.

Our job now is to hold all our primary voters, and to add a lot more votes, of whatever party, for our candidates in November.

This Memorial Day week it seemed appropriate to research the background and history of one of our older holidays. As some articles have noted, Memorial Day is more than just the kick off to summer or the beginning of a weekend of sales.

How is it different from Veterans Day? How did it get started? I was curious.

According to an article by Jerry Turnquist in the Daily Herald, a suburban Chicago newspaper, this May 30, 2018 is noteworthy as marking the 150th anniversary of the first Memorial Day. Here, as in so many areas, sources may conflict on the beginning date for Memorial Day. However, all sources seem to agree that the U.S. Civil War was the impetus behind many of Memorial Day’s observances.

It is understandable that the Civil War could have led to Memorial Day commemorations since our country lost so many soldiers, North and South, in that war. Pennsylvania has a special connection with the Battle of Gettysburg, not too far from here.

What is the difference between Memorial Day and Veterans Day? Memorial Day, previously often referred to as Decorations Day, specifically honors those who died for our country. Veterans Day honors all who served including veterans of all our wars and those alive today. The reference to Decorations Day is that many gravestones of fallen military were and have been decorated on Memorial Day in honor of their sacrifices….