A Petition to Support the SAVING AMERICAN DEMOCRACY AMENDMENT

CLICK HERE to go to sanders.senate.gov/ to hear Senator Sanders and ADD YOUR NAME to the Petition. 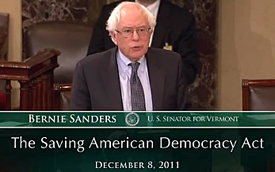 Sen. Bernie Sanders has proposed a constitutional amendment that would overturn the Supreme Court decision in a case called Citizens United vs. FEC.

CLICK HERE to go to sanders.senate.gov/ to hear Senator Sanders and ADD YOUR NAME to the Petition.