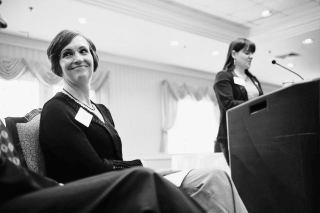 DOWNINGTOWN — Dianne Herrin has fought to ensure that climate change solutions and environmental safety are at the forefront of building and business decisions made in West Chester. At the Chester County Citizens for Climate Protection’s (4CP) annual Gene Wilson Award luncheon Wednesday, she was honored for her hard work.

Herrin, who founded and chairs the West Chester Borough Leaders United for Emissions Reduction (BLUER) committee, was presented with the Gene Wilson Award at the ceremony, which took place at Downingtown Country Club. Wilson, a former chemical engineer, founded 4CP and has been involved in environmental efforts and climate change solutions for several decades, including with the League of Women Voters, whose environmental committee he headed for many years.

“I was profoundly struck by Gene’s story,” Herrin said upon receiving the award named after Wilson. “He learned that what man puts into the atmosphere is not without consequence. His story illustrates the importance of presenting businesses with our message of climate-induced changes. Most businesses are made up of people, and for the most part, they are people we can communicate to. They want a healthy planet and they want healthy businesses.”

As the chair of the BLUER committee, Herrin has had a hand in some important legislation. The organization created West Chester’s Energy Star ordinance, the first in the country to mandate Energy Star labeling for new commercial constructions. She has established a greenhouse gas reduction goal, planning to reduce emissions in the borough by 10 percent from 2005 levels over the next five years. BLUER has also created a green checklist for municipalities and developers, a residential outreach campaign, and worked with PECO for almost a year to develop a system for regionalizing energy consumption data.

Herrin is also the founder and president of Chester County Moms for the Future, a grassroots organization made up of mothers who advocate for sustainability practices in the county’s public schools. The group successfully oversaw the conversion of Krapf school buses to a B20 biodiesel blend in five county school districts. She is the co-chair of the West Chester Area School District Energy and Cost Reduction Committee, for which she has recommended over $800,000 in energy cost reduction measures for the district, and works for Practical Energy Solutions, a company committed to sustainability. As part of her work for PES, Herrin manages the WCASD’s Student Conservation Corps, where she and the students under her direction have led several area businesses through cost-effective energy reductions. In Herrin’s case at least, it seems that one person can indeed be everywhere at once.

“It was one person, one person who did this,” said Martin Indars, legislative director for state Sen. Andy Dinniman. “It’s very clichée to say that one person can make a big difference, but this is that one person right here.”

In addition to the Gene Wilson Award, Herrin also received citations from Indars, the Chester County Commissioners and Chris Mulhall, a member of state Rep. Dan Truitt’s staff, as well as a citation and key to the borough of West Chester from Mayor Carolyn Comitta.

“Diane really has taken the initiative to turn ideas and vision into action,” Comitta said. “She really is our leader in educating us about a healthier future.”

“Dianne is a longtime environmental activist whose passion is evident in everything that she does,” added Meryle Rothman, a 4CP member.

Nearly all the speakers at the event praised Herrin’s dedication to climate protection as well as her desire to create a better world for her children and future generations. BLUER was formed in 2006 by Borough Council, and Herrin has led the charge to make West Chester’s economic and environmental future more sustainable ever since. Continued…

“We are still here five years later fighting the same fight,” said Courtney Marm, vice chairwoman of the committee. “Throughout all of BLUER’s efforts, Diane’s leadership has remained constant. She is a bulldog of an advocate.”

Herrin said the main goal of her work is to ensure that businesses and the community as a whole become more aware of climate change and work to make energy conservation and emissions reduction a staple of the borough.

“The environment, the economy and our future are all intertwined,” she said. “We are not working at cross-purposes — we are all working for our future.”